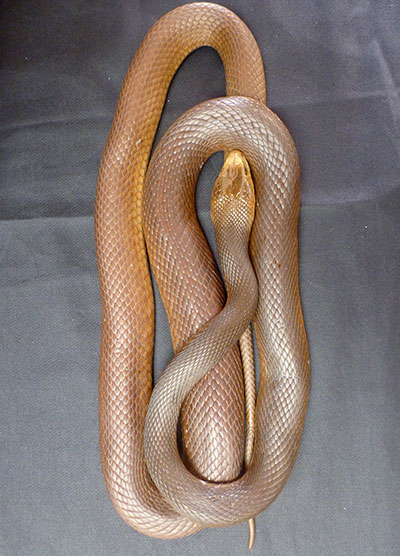 Average up to 2 metres, but although rare, individuals have been recorded to nearly 3 metres in total length.

Mostly active during the day, especially warm and hot mornings. Also recorded active on roads at night. Secretive, highly alert snake that is rarely seen even in areas where they are apparently common.

The Taipan is uncommonly sighted throughout the Greater Brisbane region with the majority of records within the last 30 years being of road killed specimens. Recent localities include the Samford Valley, the lowlands west of Mt Glorious, Beaudesert and Borallon, North West of Ipswich. Snake catchers Brisbane recently recorded a Taipan in Pullenvale, west of Brisbane. This specimen is the closest ever recorded to the Brisbane CBD and is the first to ever be recorded in Brisbanes western suburbs.

The discovery of a Taipan around the home would be considered an extremely rare occurrence within South East Qld. Correspondence with licensed snake relocators across the known distribution of the species have not accounted for a single specimen within a residential property over the past 20 years. However the recent discovery of a specimen at Pullenvale by Snake Catchers Brisbane in December 2011 constitutes the first reliable record by a snake catcher for the South East.