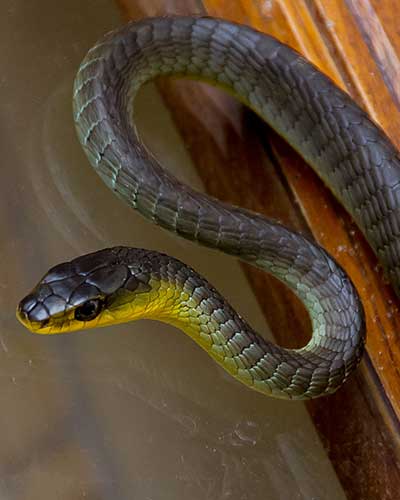 Non-Venomous
More often than not the common tree snake is inoffensive and bites infrequently. Emits a strong odour from the cloaca if handled firmly.

The common tree snake is characterised by having a sleek slender body with long, very thin tail. Distinctive ridge extends along outer edges of belly making shed skins easily identifiable. Often quite variable, it has a wide colour ranges from green, olive, brown & black to rare blue-grey on upper body. Belly yellow or creamy, with bright yellow present on throat. Some specimens with blue or grey belly but generally maintain the yellow coloration above the ventral ridges. Skin between the scales when spread show as a light sky blue especially after consuming a meal larger than its body diameter or when defensive. Eye appears large comparative to head. Midbody scales at 11 -13 rows (rarely 15).

Wide range of habitats from the periphery of rainforest, wet sclerophyll forests, dry woodland, farmland, and suburban backyards and gardens throughout the region.

Diurnal (Active by day) it is a fast and agile species which is equally at home on the ground as much as in the arboreal habitats by which its name suggests. Not only is it an agile climber but also a good swimmer like most snake species.

An active searching predator that targets predominantly frogs and skinks. Males attain a smaller size than females and this is reflected in the prey selection by individuals. Males typically target slender prey such as geckoes, skinks and small frog species. Females however are known to take small blue tongue skinks and large Common Tree Frogs.

Common & widespread throughout Brisbane. Found in all suburbs including the highly trafficked inner city environs of the Brisbane CBD.

Probably the most common species to enter homes due to its highly active foraging nature. Generally above ground environs such as heavy foliage of trees and shrubs, exposed beams of verandahs and pergolas, sheds and garages. Fast-moving and hard to see in heavy cover. Have exploited the abundant supply of Asian house Geckoes, high densities of skinks and presence of frogs in continually watered localities associated with suburban environments thus accounting for there frequency around homes.