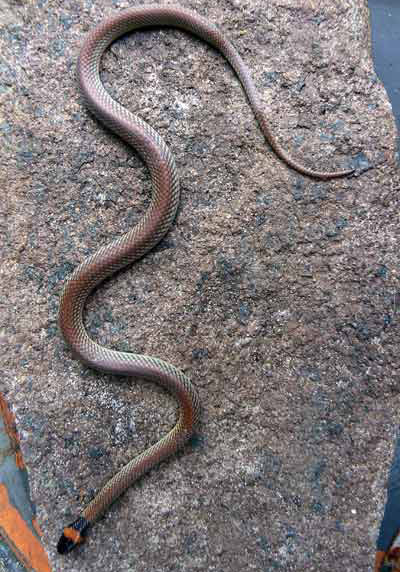 Weakly Venomous
The Red-naped snake is not considered significant. Weakly venomous but considered harmless due to inoffensive nature and reluctance to bite.

Small smooth snake with a reddish brown dorsal coloration. Individual scales appear outlined in black. Head has a distinct red spot enclosed in black extending over the entire head and down the neck. The underside of the head is white which extends into a white belly.

35cm but large specimens have been recorded at 40cm.

Widespread throughout most suburbs of the greater Brisbane region. Commonly found to the west of Brisbane through Ipswich and Brisbane Valley.

Found in backyard swimming pools after falling in during nocturnal foraging movements. Often the victim of roaming cats. Will utilise a range of ground localities for refugia including constructed rock and sleeper retaining walls, under rocks, sheets of iron, timber piles and other discarded human litter. Six individuals were found aggregated in a crack of concrete beneath a linoleum floor covering in Coalfalls, Ipswich.