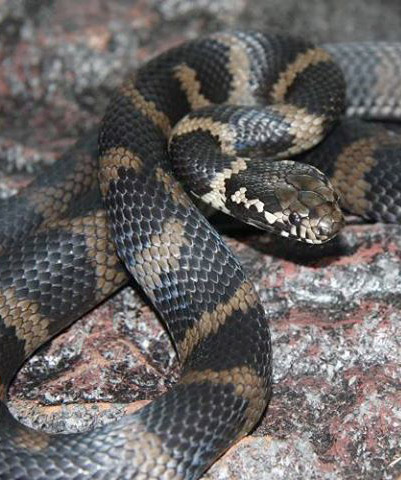 Moderately venomous
The Stephens Banded Snake is regarded as moderately venomous, however recent cases would suggest this to be understated.
Bites from this species have been known to cause severe local symptoms with more general reaction such as headaches and nausea also recorded. All bites from this species should be treated immediately and attended to with correct first aid..

90cm with a maximum length around 1.2 metres.

Found locally around Mt Nebo and Mt Glorious with populations also existing on the Lamington Plateau and Gold Coast Hinterland.

The habitat specific requirements of the Stephen’s Banded Snake sees this species found in and around homes only in areas of suitable habitat at Mt Nebo and Mt Glorious within the Brisbane region. A local snake catcher has confirmed numerous calls involving the species entering homes.