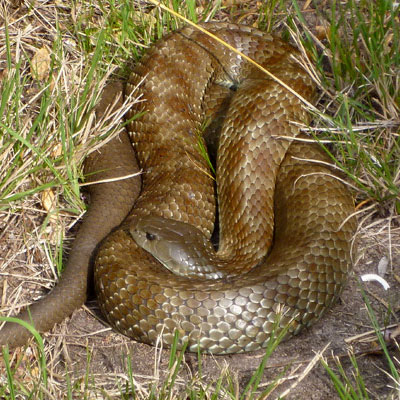 Highly Venomous
Highly Venomous. Bites from this species have caused human fatalities. Reclusive disposition but will inflate and flatten the body and neck in an effort to intimidate a perceived aggressor. Bites should be treated immediately and attended to with correct first aid.

Solidly built snake with a large broad flat head. Colour variable with many shades from light grey to olive, brown through to black. Cross-bands of lighter scales continue down the length of the body. Belly lighter than main colour, usually cream or grey, often darker on throat & under tail. Midbody scales at 17-19 rows (rarely 15)

Diurnal though has been recorded within the Gold Coast Hinterland active at night stalking frogs.

Opportunistic hunter of small vertebrates such as frogs, small mammals, lizards and birds.

The only specimen recorded from the Greater Brisbane area recorded from North Stradbroke Island nearly 100 years ago. Now known only from populations at Beerwah and Caloundra on the Sunshine Coast and areas of the Gold Coast Hinterland.

This species is absent from the Brisbane region and is highly unlikely to figure in all but the rarest encounters around human dwellings in known habitats to the north and south.