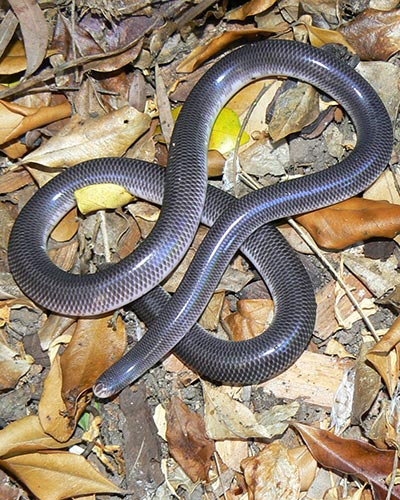 Non-Venomous
The Blind Snake is Inoffensive but some species may release a strong odour when handled.

A worm like appearance with colour varying from pink through to black often with a white to cream ventral surface. Scales are very smooth with a distinctive blunt tail. The eyes appear as a dark spot and are covered by scales. With the tail has a short spine.

Found in a variety of habitats from dry woodland to rainforest at elevation.

Feeds on both termites and ant larvae and pupae but preferences may vary between species.

Recorded throughout almost all localities in the greater Brisbane region with the exception of the inner city. Appears to favour moister suburbs close to the city with the most commonly encountered species Ramphotyphlops proximus.

Due to its restricted above ground movement and cryptic nature blind snakes are rarely seen around suburban homes. Only two specimens have been located by a snake relocator in the Western suburbs of Brisbane over the past 16 years, both brought to the residents attention by domestic cats.