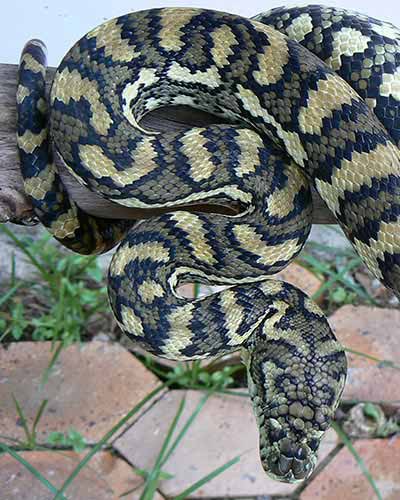 Non Venomous
Bites from a large Carpet Python may cause substantial lacerations or punctures to both people or pets. Injuries can be quite severe. Bites requiring surgical intervention in both humans and pets have been recorded. In this case bites from this species should be avoided as a precaution.

General description: Large, heavy bodied snake with a highly variable, mottled & blotched pattern and color. Mostly white to cream on the underside. Head is distinct from the neck. Deeply pitted scales (infralabials) along bottom jaw and to a lesser extent the upper jaw (supralabials) with small “granular scattered scales on top of the head. Midbody scales in 40 – 60 rows.

Habitat in SE Qld: Occupies all habitats from rainforest, wet sclerophyll forests and dry woodland through to suburban backyards and the periphery of highly disturbed farmland. Even commonly present in high density living areas.

General habits: Most commonly encountered snake within the region. Active day and night. Large specimens can take small suburban pets such as dogs, cats and guinea pigs with smaller specimens taking caged birds. This is one species that has thrived with habitat alteration and has been highly successful at proliferating within the suburban landscape.

Local distribution: Recorded from all suburbs of the Greater Brisbane region including the inner city with highest densities occurring in leafy suburbs such as The Gap, Chapel Hill, Kenmore and Holland Park, Daisy Hill. One of the more common species found within the confines of the Brisbane CBD district.

Around the home: Will utilise all above ground environs such as roof and wall cavities, exposed beams of verandahs and pergolas, sheds and garages. Often resides in the heavy foliage of trees and shrubs. At ground level will utilise dense vegetation, miscellaneous large ground litter such as stored building materials and accumulated garden debris. Any enclosures purpose built for housing family pets should be built with the intention of being snake proof.