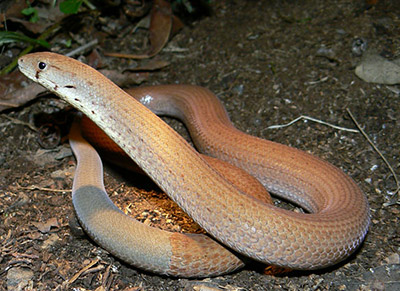 The Common Scaly-foot has a rounded snout head not distinguishable from neck and prominent ear openings. The scales are strongly keeled (rough) and the body is heavily built, with the hind flaps prominent. Greyish-brown to mid-grey in colouration with no obvious markings. Scales have a glossy texture.

Inhabitant of ground debris and leaf-litter in heaths, dry sclerophyll forests and savannah woodlands, and tolerant of disturbed areas adjacent to brigalow communities and Spinifex sand-plains west of Brisbane.

Excluding moister suburbs it has been recently recorded in Closeburn, Murrumba Downs, Wacol, Ipswich, Mt Crosby and Amberley. Expected to be widespread in suburbs with preferred dry vegetative structure.

Due to its cryptic nature and nocturnal movement the Common Delma is not often seen. Most records are from individuals uncovered in diurnal refugia underground debris such as timber and discarded rubbish.