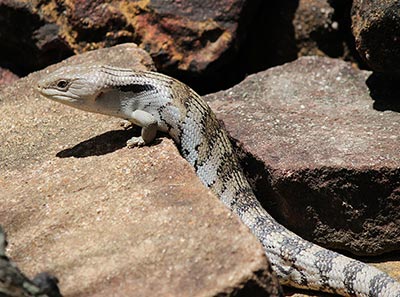 Robust with a long body and tail, smooth body scales which are long and enlarged on the head. Colour can be highly variable, with shades of brown through to grey with bands between the neck and hips and on the tail. The head is robust and generally triangular in shape. Four short legs each with five toes. When harassed inflates its body and gapes its mouth to protrude its blue tongue sometimes with a hissing sound as it expels air.

Found throughout Brisbane in virtually all suburbs except areas with high elevation and rainforest.

This species is easily recognisable and despite its obvious size has successfully proliferated the suburban environment despite the high occurrence of large domestic animals in its favored suburban habitat. Cats and dogs account for large numbers of injured or dead blue tongues brought to wildlife carers every year.
Any ground debris or heavy vegetation may be utilised for refugia. Often wonders into homes through open doors when foraging. Although it has a strong bite and impressive defensive display it is generally inoffensive and of no concern to people or pets.