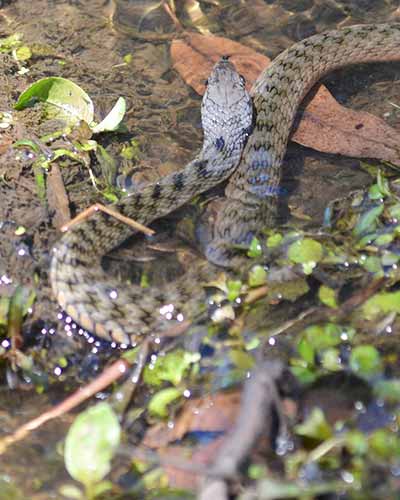 Variable colouring but typically various shades of grey, brown or olive with irregular, broken cross-bands or flecks of darker brown and flecks of paler creamy colour. Belly surfaces cream or pale rusty colour with dark scale edges. Feature is each scale has a distinct raised longitudinal ridge or ‘keel’, giving the whole snake an appearance of parallel ridges down length of body. Assumably confused with the highly venomous Rough-scaled Snake (Tropidechis carinatus) which lacks a loreal scale and whose keeling of the scales is less defined. Midbody scales at 15 (rarely 17) rows.

As with many of the colubrid snake species the female Keelback attains a much larger size and length than do males. Male average size is around 45cm but females often reach a length of 65cm or more.

This species is often associated with wetland and riparian areas but can persist in moist suburban backyards and parks. It can occur at quite high densities in favorable localities with the main consistent feature being proximity to water or damp riparian areas.

The main components of this species diet is frogs, lizards and occasionally fish and tadpoles. Often noted for its ability to eat the introduced Cane Toad but only smaller toads and their tadpoles are generally targeted. The onus on this species to be considered a natural control for the Cane Toad is an over exaggeration of the ability of this snake to handle the toxin quantities found in larger specimens.

Found throughout moist suburbs or areas where creeks and drainage lines, both natural and unnatural, persist. Often found in high numbers in suitable localities especially in the vicinity of marsh or dam habitats.

The content on this page is intended only to provide a summary and general overview . It is not intended to be comprehensive nor does it constitute to be exact in every circumstances. We attempt to ensure that the Content is current but we do not guarantee its currency.